On several occasions the Sherlock Holmes stories contain words and phrases that may not be familiar to many modern readers, so this is a first attempt to help in identifying some of these. But what shall I call it?

The ulster is mentioned in ‘A Study in Scarlet,’ ‘The Sign of Four,’ ‘A Scandal in Bohemia,’ ‘The Adventure of the Blue Carbuncle,’ and ‘The Adventure of the Noble Bachelor’ is the closest thing in the stories to the Inverness cape that Sherlock Holmes is so often portrayed as wearing, and he actually donned one when pursuing “Mrs. Sawyer” during the first story in the list, and Holmes and Watson wore ulsters in their evening excursion during the fourth story in the list. The ulster is a long–usually below the knee–overcoat with a cape and sleeves though the cape went out of fashion at some point. 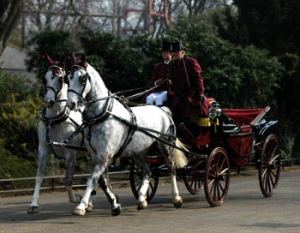 The landau is mentioned in both ‘A Scandal in Bohemia’ and ‘Silver Blaze.’ In Holmes’ day, it was one type of horse-drawn, four-wheeled, convertible carriage with a full or half side-door and a dropped foot well for ease of entry and exit. The two-part collapsible top rested at front and back then attached in the centre when fully opened.

NEXT WEEK: The naming of John H. Watson, M.D.